Edmonstone's Close is the perfect holiday apartment for exploring Edinburgh.  The apartment is situated right on the vibrant Grassmarket, in the centre of the Old Town and just yards from Edinburgh Castle and the Royal Mile.

On this page you will find information on some of our favorite places and things to do near the apartment.  We have also provided links to websites about major events in Edinburgh and the area in general so that you don't just have to take our word for it!

Edinburgh is the capital city of Scotland and the seat of the Scottish Parliament.  The city is a major historical centre including the Old Town and New Town districts, which were listed as a UNESCO World Heritage Site in 1995 in recognition of the unique character of the Medieval Old Town and the planned Georgian New Town. There are over 4,500 listed buildings within the city.  Thousands flock to Edinburgh Castle and the Royal Mile and the city has many other attractions, including festivals, shopping, restaurant, theatres, museums and galleries. 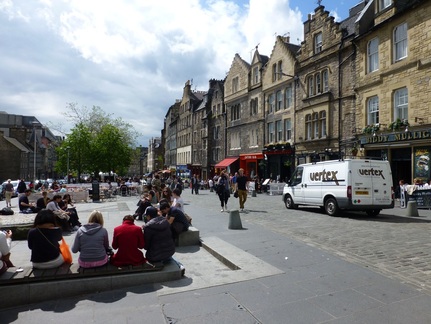 Enjoying the sunshine on the Grassmarket
This historic market square right outside the apartment is one of Edinburgh's most vibrant and picturesque shopping and dining areas.  From 1477 to 1911 the Grassmarket was one of Edinburgh's main markets for horses and cattle. It was also a setting for public executions! Today the old market area is surrounded by local retail shops, pubs, and restaurants.
There are great views of the Castle from the west end of the Grassmarket and you can see remnants of the Flodden (16th century) and Telfer (17th century) walls from the Vennel, an alleyway on the southwest of the Grassmarket. 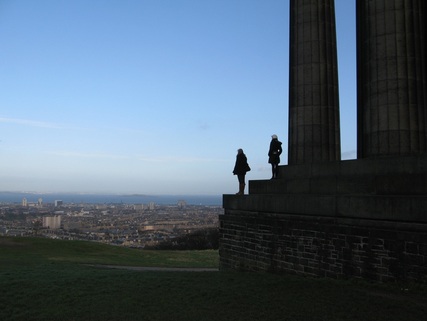 Leith from Calton Hill
The views from Calton Hill are simply stunning. It offers panoramic views over Princes Street, Leith, Arthur's Seat, to mention a few. On a clear day the Forth Road Bridge and Forth Rail Bridge are clearly visible too! Calton Hill is a place to walk to or just sit and soak in the views.  Home to a number of interesting monuments, including the National Monument, Nelson Monument and City Observatory, Calton Hill is an easy and rewarding climb and can be accessed from the east end of Princes Street. 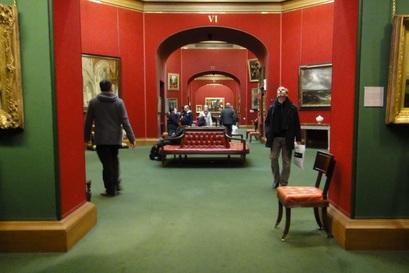 The Scottish National Gallery houses an interesting permanent collection and has visiting exhibitions. The entrance is over the Princes Gardens and on most days you can watch and hear the bagpipes being played just outside the gallery. 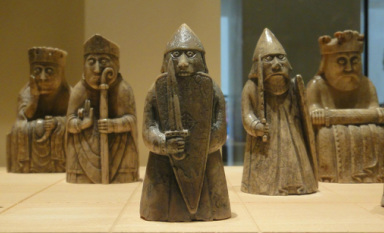 The Lewis Chessmen
Free history and culture!  Home to many of Scotland's national treasures and only a few minutes walk from the apartment.
Pictured here are some of the Lewis Chessmen, a beautifully carved set of late 12th century chess pieces made from walrus ivory and whales' teeth.  93 of these chess pieces were discovered buried in an underground chamber near Uig on the Isle of Lewis in 1831.  It is thought they were probably made in Norway, between 1150 & 1200AD, and were likely en route to being traded in Ireland when they were buried for safe-keeping.  In those days, the Western Isles of Scotland were part of Norway.  11 of the chess pieces are permanently held in the National Museum of Scotland and 82 at the British Museum in London.
http://www.nms.ac.uk/our_museums/national_museum.aspx 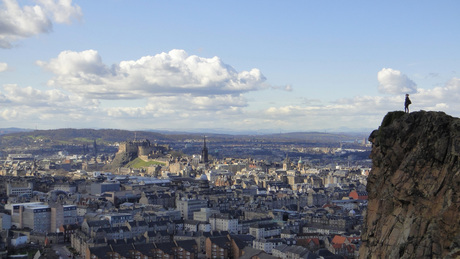 Arthur's Seat in Holyrood Park was formed when an extinct volcano system (like Castle Rock, on which the castle sits) was ground down by glacial action.  Situated in the centre of Edinburgh, about a mile east of the Castle, Arthur's Seat at 250 metres high is a fairly easy climb and offers spectacular panoramic views of the city. 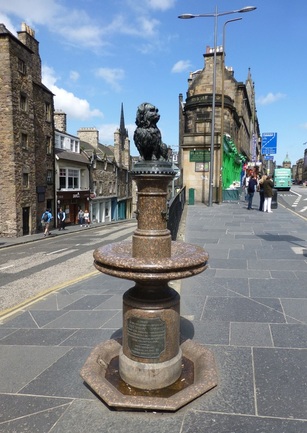 The statue of Greayfriars Bobby, on George IV bridge outside Greyfriars Kirkyard
Greyfriars Bobby was a wee Skye Terrier who followed his master's coffin to the graveyard in 1858 and then stood vigil over his grave for 14 years until his death in 1872. His devotion captured the hearts of many and inspired two films. Greyfriars Kirk & Kirkyard are just around the corner from the apartment, with entrances to the kirkyard from both Cowgatehead and Candlemaker Row.  As well as the memorials to Greyfriars Bobby & his master John Gray (Auld Jock), the kirkyard contains the graves of many of Edinburgh's famous citizens, memorials to the Covenanters and remnants of the 16th century Flodden Wall, which was completed in 1560 as a defensive wall around the city.

Other Favorite Places of Interest and Events (links to other websites)

Glenkinchie Distillery - Edinburgh's local malt whisky distillery.
The Stand - Comedy Club - Open every night and hosting a varied programme of contemporary comedy from the best UK and international comedians.
Edinburgh Zoo - A great day out for all the family.  Note that if you want to see the Giant Pandas, you'll need to book ahead of time.
Edinburgh Festivals - Including the Edinburgh Festival and the Festival Fringe.
Edinburgh Castle - Edinburgh's most famous landmark.
APARTMENT DETAILS         RATES AND AVAILABILITY          PHOTO GALLERY        GUEST REVIEWS             MAP         DIRECTIONS